The Latest Developments: Hawaii health officials reported that 10 more people in the state have tested positive for COVID-19, pushing the total number of cases up to 26. Eight of the new cases were on Oahu, while two were on Maui. Department of Health Director Bruce Anderson believes all are travel-related or were cases of people who came in contact with people who traveled.

“That’s significant,” he said. “We believe at this time there’s no evidence of extensive community transmission in the state of Hawaii.”

The Senate Special Committee on COVID-19 held its first meeting Thursday and announced new plans to limit travel to Hawaii.

The committee recommended to Gov. David Ige that all airline passengers be subject to a two-week home quarantine when they land.

The Harbors Division of the Department of Transportation on Wednesday stopped allowing cruise passengers to come on shore except for Hawaii residents. Cruise ships will still be allowed in port to refuel and resupply. The ban could last a month or two.

State Sen. Clarence Nishihara reported testing positive for the virus, prompting officials to shut down legislative offices and the State Capitol for now. He had recently traveled to Las Vegas.

That announcement was followed by a harsh letter from House Speaker Scott Saiki imploring Ige to immediately shut down the state and require people to shelter in place. The speaker said the state’s response to the COVID-19 crisis “has been utterly chaotic and there is a mass confusion among the public.” 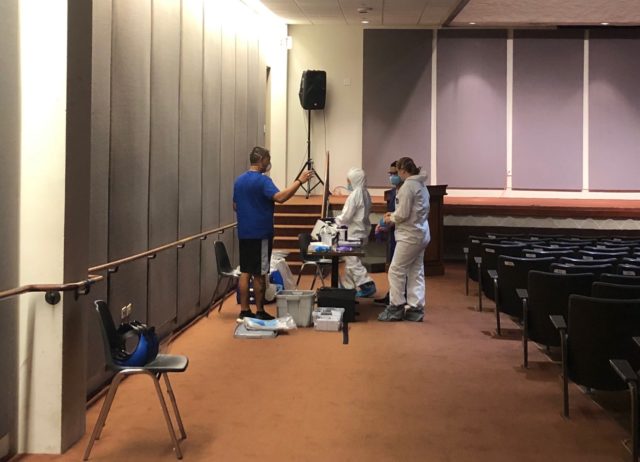 A medical team suited up in protective equipment at the Capitol Thursday after a state senator was diagnosed with COVID-19.

Hawaii News Now reported Tripler Army Medical Center announced the first case linked to Hawaii’s Army community, saying an employee at the hospital tested positive after returning from a trip to New York and developing symptoms. The employee is in self-isolation at home and undergoing monitoring.

In Washington, D.C., Hawaii Sen. Mazie Hirono joined 16 other Democratic senators in sending a letter harshly critical of the Trump administration for its failure to ensure a “sufficient number of diagnostic testing kits for COVID-19 are available.”

Questions And Answers: Here are more answers Civil Beat found in response to concerns you sent us.

Why are the airlines continuing to offer low rates, luring people to believe a trip to Hawaii may be a good thing?

As The Economist puts it, the airline industry is getting “clobbered.” Airlines are asking for $50 billion in federal aid.

The airlines need paying passengers to cover the costs of operating the fleet. This includes paying pilots and flight attendants and paying for fuel. There’s only so much an airline can do to reduce hours and costs for workers, in part because of union contracts.

Since President Donald Trump enacted a 30-day ban March 14 on most flights to the U.S. from Europe, multiple airlines companies have reported they have had to cut down on their flight schedules, including Hawaiian Airlines, which reduced its flights by 40% for April.

Earlier this week, Ige urged all visitors to not take that vacation they were planning to the Hawaiian Islands.

The low rates you’re seeing in general are a survival tactic, it appears.

Can this coronavirus mutate?

Yes. The MIT Technology Review reports that genes, including those part of viruses, naturally mutate. COVID-19 appears to mutate a little slower than influenza, though. Researchers continue to look into it, as well as a possible vaccine.

How The Coronavirus Has Changed Your Behavior: We also asked people what they’ve been doing differently since hearing about the virus. Here are a few things they’ve told us:

We have many more questions to answer so stay tuned for similar posts each day. Meanwhile, use the form below to ask us anything and tell us what, if anything, you’re doing differently to avoid getting sick.

Sign up for our FREE morning newsletter and face each day more informed.

Coronavirus: Airline ticket rates reduced, but is anyone flying?