Chengdu, China – China has held a national day of mourning in honour of those who died from the coronavirus pandemic that killed at least 3,335 people in the mainland, including 13 medical workers who died after contracting the disease while treating their patients.

The air-raid siren cracked across cities all over the country for three minutes on Saturday starting at 10am (02:00 GMT) to signal the start of the commemoration. All cars, trains and ships stopped, while blaring their horns. All entertainment activities were halted for the entire day.

The day of mourning coincided with the country’s Tomb-Sweeping Festival, also known as Qingming, during which Chinese families would traditionally visit the graves of their deceased relatives, burn some “spirit money,” and sweep the tombs as a sign of respect.

In one of the most well-known poems written about Qingming, Chinese poet Du Mu wrote, “A drizzling rain falls like tears on Mourning Day, travellers’ hearts lost in dismay.”

Many in China say that almost every year, the annual rite happens under gloomy or rainy skies, and this year the spectre of the deadly coronavirus disease has added another layer of unbearable “dismay”.

In Wuhan, the epicentre of the disease that started in late December, traffic lights turned red for three minutes, while a remembrance ceremony was held at a park by the Yangtze River. Images from the event showed people bowing their heads and closing their eyes while standing as sirens sounded.

“For us humans, we need this kind of ritual – to have a closure, or to have these memories engraved in our hearts,” Luo Qiang, a Wuhan resident, said.

“When the sirens went off, it’s almost impossible not to weep or imagine all the hearts broken and lives lost over this epidemic.”

Luo Qiang said he changed his Weibo avatar to black and white, like many others on the social media platform, to pay respect to those whose lives were claimed by the virus.

It is expected that the lockdown in Wuhan will be lifted in four days.

‘A day of despair’

In the capital, Beijing, the Chinese national flag was flown at half-mast in the middle of Tiananmen Square as the sound of a siren wailed in grief across the city.

In Chengdu, one of the most important commercial centres in western China, non-stop rain beginning the previous night left a gloomy atmosphere in the city, as cars stopped at intersections while honking in-sync with the sirens.

For those who have lost their loved ones in the outbreak, Saturday marked a day of despair, as many collected the ashes of their deceased family members. 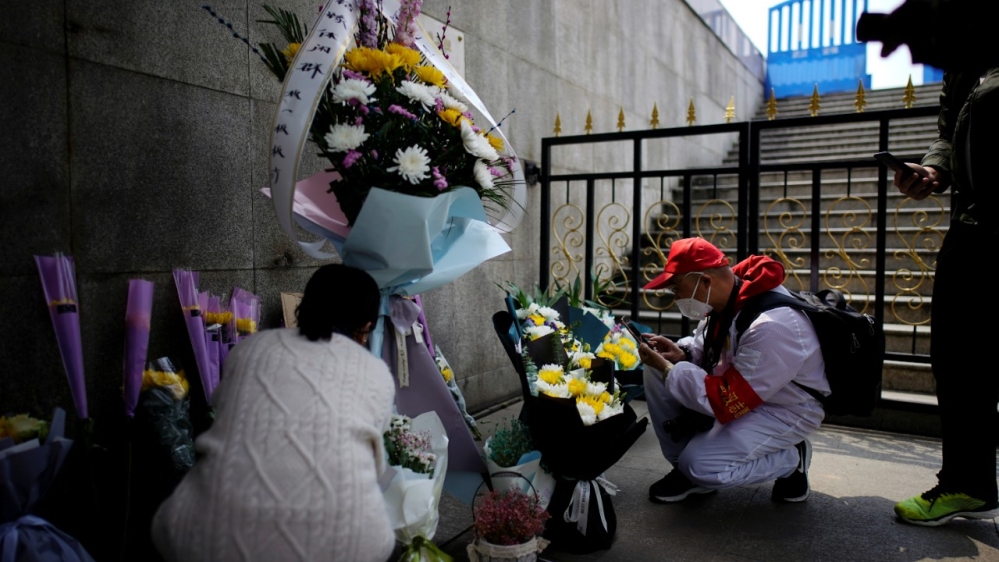 People pay tribute to the thousands of coronavirus victims in Wuhan on Saturday, during the national day of mourning that coincides with the Qingming Tomb-Sweeping Festival. [Aly Song/Reuters]

Xiao Xin collected the ashes of her mother from Wuhan’s Hankou funeral home six days ago, and the urn is still sitting at the room where her mother used to live.

But with the government ban on large gatherings still in place in cities such as Wuhan, grieving families are still unable to bury their loved ones, let alone hold a proper funeral.

“I can’t count how many times I have cried, and I thought I had dried all my tears,” Xiao Xin, not her real name, told Al Jazeera.

“But when the siren went off, I started to cry my heart out – I miss my mother dearly and I don’t know how I am going to live from now on.”

“For now, I just want to bury my mother alongside my father who passed away three years ago.”

Another Wuhan resident, Zi Zi, fortunately, does not personally know anyone who has been infected or died from the virus. But living in Wuhan still brought her immense sense of belonging to the tragic story, she said.

Standing in the balcony of the apartment with her parents, Zi Zi, also not her real name, said that her parents started to shed tears almost as soon as the siren went off.

“They (my parents) have gone through the Cultural Revolution and have witnessed many misfortunes of this country, so to see them weeping at the sound of the siren and the mere thought of what Wuhan went through is a powerful statement already,” she told Al Jazeera. 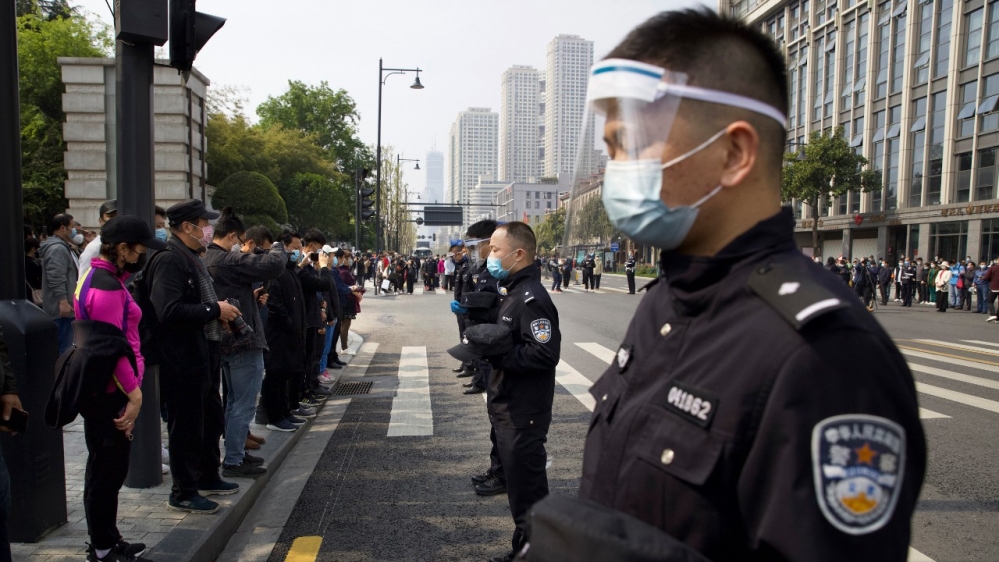 As the pandemic rages across the globe, some people are casting more doubt on the reported total death toll of the virus in China. [Ng Han Guan/AP]

But the national grief does not seem to do much to quell the anger from some people in Wuhan.

As the pandemic rages across the globe, some people are casting more doubt on the reported total death toll of the virus in China. Some reports have suggested that the actual number could be as high as 42,000, although no concrete evidence has been offered to support that claim.

One resident who asked not to be named for the fear of repercussions said that because of the suspicious number of total reported deaths from the virus in China, he did not think the government was being honest.

“Online posts are saying there might be more than 40,000 deaths instead of the officially reported some-3,000, I don’t necessarily believe that,” he said.

“But I do have my doubts about the real number of deaths, and I think the government should be as transparent as possible.”

“Transparency is the least thing they could do to actually pay tribute to the people who unfortunately died in this epidemic.”

For some people, however, Saturday’s event is simply about grieving. The coronavirus pandemic has been compared to other national tragedies such as the 2008 Sichuan earthquake and the death of Mao Zedong in 1976.

‘It will continue to hurt’

Still for others, like the residents of Sichuan province, where Chengdu is located, this year’s national day of mourning was also a reminder of the deadly 2008 quake that killed almost 70,000 people.

“Twelve years ago, Chengdu was the hardest-hit megacity by the earthquake,” Liu Wenqin, a nurse from Wenchuan, the epicentre of the earthquake, said.

“Now another round of national mourning day seems to have opened that deep wound and reminded us of the unforgivingly painful past.”

Song Lin, a teacher, lost her son during the earthquake, and she said knows what other families are going through now following the pandemic.

“I never really got out of the misery. I understand their pain: it hurts so much, and it will continue to hurt.”

Why the U.S. Will Outcompete China