Latino groups in San Francisco are urging Mayor London Breed to provide financial and social assistance to end long-standing inequities that have made Latino residents particularly vulnerable to COVID-19.

Nearly 60% of people with a known ethnicity who have tested positive for the coronavirus in San Francisco are Latino, though they make up just 15% of the city’s population, according to the most recent data from the city’s Department of Public Health. Similar disparities have been reported in counties across the Bay Area and California.

A coalition of more than 30 organizations — including the Calle 24 Latino Cultural District, the Central American Resource Center and the Mission Cultural Center for Latino Arts — asked Breed to set up regular meetings with them, and to have the city formally classify low-income Latinos as a vulnerable population.

The coalition also asked the mayor to provide Latinos with better access to food, health care, affordable housing and job services, among other resources as the health crisis wears on.

“Such significantly higher infection and hospitalization rates among San Francisco’s low-income Latinos, occurring as a result of longstanding social inequities, heightens vulnerability,” the group said in a June 5 letter to Breed.

“When those conditions are not addressed and persist, they continue to place individuals at significant risk for COVID-19. The data confirming vulnerability among San Francisco’s low-income Latinos is stark and demands a focused effort by the city of San Francisco to fully address its socioeconomic origins and impact.” 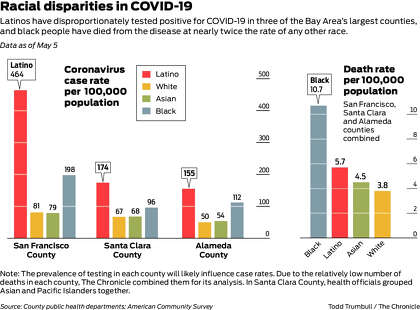 Low-income Latinos have often been unable to socially distance during the pandemic because they typically work in low-wage jobs deemed essential and may live in crowded living situations.

Health experts and advocates say those myriad factors — and the fear of deportation that has led some Latino immigrants to avoid seeking medical care — have caused coronavirus infections to soar among Latinos.

Breed’s office said Wednesday that the mayor has not yet responded to the coalition’s requests. But spokesman Jeff Cretan defended the administration’s handling of the crisis, saying the mayor’s office has been helping the Latino community throughout.

Cretan said the city has created several programs to assist low-income residents with food security, temporary housing and financial assistance in response to the pandemic. These include the Give2SF Fund, which provides funding for $200 Safeway gift cards to roughly 2,500 low-income, undocumented San Franciscans for online or in-person purchase of food items, he said.

A team within the city’s Emergency Operations Center also focuses on outreach, connecting residents to services and investing in programs that help people disproportionately impacted by the virus, Cretan said.

On June 2, city public health officials expanded the definition of “vulnerable populations” to include Latinos, immigrants and other “marginalized groups that may experience systemic inequities.” These populations are prioritized for programs and services in response to the virus, including access to hotel rooms for self-isolation, Cretan said.

Meanwhile, the coalition began drafting its letter before the killing of George Floyd by a Minnesota policeman on May 25. But the resulting protest movement and its demand that society rethink deep-rooted inequities prompted the coalition to raise similar issues about the health disparities unfolding for Latinos in the COVID-19 pandemic, said Norma Garcia, director of policy and advocacy at the Mission Economic Development Agency, a member of the coalition.

“The silver lining of the pandemic is it makes absolutely clear what we felt and knew to be true — this is what happens when inequities are allowed to persist,” Garcia said. “We have an opportunity and an obligation to change the status quo.”

The coalition also sent the letter to several city agencies and state and federal politicians.