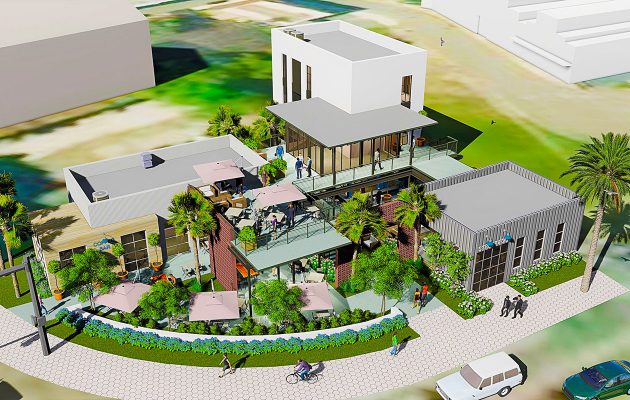 Rendering of The Hub

Architect Joe Cronk said nobody had to sell him on Brooklyn.

“We’re ex-Haskell guys. We grew up on Riverside. Brooklyn is a vital link between 5 Points and LaVilla and Downtown,” he explained.

And Cronk isn’t the only one who is “sold” on Brooklyn. In the last five years, the historic black neighborhood has undergone a renaissance that has transformed vacant lots and dilapidated buildings into high-rise residences and busy shopping centers.

And, the renaissance isn’t over. A hotel, a major office building and more apartments are in the works, along with road and infrastructure improvements that will add momentum redevelopment in neighboring LaVilla as well as Downtown.

Cronk’s contribution to the renaissance is the proposed Hub Brooklyn.

In its promotional material, Cronk Duch Architecture describes the concept for the Hub as “a place to meet friends for coffee and artisanal fare, a refuge from the office grind, a spot to refresh after walking the Emerald Trail, perhaps cocktails and al fresco before the evening’s big event.”

It was warmly received by the Downtown Development Review Board, which still must give its final approval.

The Hub will be two stories built on 0.2 of an acre, what Cronk described as a “lost lot” at Forest and Riverside. The firm’s design studio will take up part of the second floor, but the rest of the space will be devoted to food and beverage by their primary vendor Southern Grounds.

The food space will be divided into three pods for fast casual, including a coffee shop and a bar. Seating will be available inside and outside on the second-floor terrace or under cover on the first floor. Cronk hopes to have it completed by next fall.

Cronk envisions people stopping by for their morning coffee, coming back for lunch and lingering over a beer after work.

The site is well positioned to become a neighborhood gathering spot.

Across Riverside Avenue, Fidelity National Information Services Inc., a Fortune 500 company, is building its new 12-story world headquarters. Retail space will be included in the adjacent eight-story garage, which will have parking available for the public.

FIS, which has offices down the street, bought the former Florida Blue parking lot in June for $14 million. Florida Blue is building a new $22.5 million garage on Forest Street.

Lori Boyer, CEO of the Downtown Investment Authority, said those projects add some important elements to the redevelopment of Brooklyn — people and parking.

FIS, which has 1,200 employees, is expected to add 500 more when the building is completed in 2022. And both FIS and Florida Blue are allowing public parking in their garages.

FIS will tower over the new residential district that has sprung up in the last five years.

Boyer said the two projects that launched the redevelopment of Brooklyn were NAI Hallmark’s 220 Riverside and Regency Center’s Brooklyn Station shopping center, anchored by Fresh Market. 220 Riverside is a multi-use development with 294 apartments and 17,000 square feet of retail space fronted by Unity Plaza with an amphitheater and pond. The city contributed major road improvements to Riverside Avenue and Forest Street as well as a stormwater pond.

“It was a collaborative effort with a lot of people,” Boyer said. “When 220 and the shopping center came together is what helped Brooklyn take off.”

In 2016, the Winston YMCA opened its new facilities that replaced the Yates YMCA.

The Brooklyn Riverside, a five-story modernistic complex of 310 units, emerged behind Brooklyn Station,

The $55 million Vista Brooklyn project is quickly taking shape between 220 Riverside and Brooklyn Station. The 10-story building, developed by Bristol Development Group and NAI Hallmark, will have 308 units, 14,000-square-feet of ground-floor retail, a roof-top pool, dog park and bar.

A hotel on Oak Street

And, Brooklyn is getting its first hotel. A Residence Inn by Marriott is planned for 357 Oak St., west of Unity Plaza. The $10.2 million project is a seven-story hotel with 136 rooms that will be built by Pinkerton & Law Construction of Orlando Inc. Baywood Hotels of Miami owns the site.

Another hotel is rumored to be under consideration for the multi-use redevelopment of 1 Riverside, the former home of The Florida Times-Union.

Morris Communications of Augusta, Ga., has proposed a 200-room hotel, 300,000 square feet of office, 400-500 multifamily units, plus retail. But the company has yet to make a presentation to the DDRB.

A much-anticipated aspect of that project is the “daylighting” of McCoy’s Creek, which runs under the buildings. The creek is a key part of Groundwork Jacksonville’s Emerald Trail project, a 30-mile network of trails that will encircle Downtown.

The part of the 10-year, $31 million project that includes Brooklyn will involve restoring the creek from the river to Myrtle Street to improve water flow, promote a natural habitat for fish, plants and wildlife and create recreational options like kayak launches.

The city added the Gefen kayak launch several years ago. And now, the city is putting in a new public dock at Jackson Street near the YMCA, which is expected to be complete next year, and another at Post Street in 5 Points. The goal is to have public docks at regular intervals for recreational boaters who might want to come to the Arts Market or for dinner, Boyer said.

A new park dubbed the Artists’ Walk, will be put in under the Fuller Warren Bridge from Riverside to Park street. Work on that project won’t begin until the multi-use path being added to the bridge is complete sometime next year.

That path will give pedestrians and cyclists dedicated space over the busy bridge and connect the Northbank and Southbank Riverwalks.

The Jacksonville Transportation Authority plans to build a Skyway station at Leila Street and Riverside. The $800,000 project will link the Central Skyway Station at West Bay and Lee streets in LaVilla to the Northbank.

The DIA’s Park Street Road Diet project will reduce Park Street from four to two lanes and add on-street parking, a bike lane, and landscaping. The goal is to slow down vehicular traffic and open the area to pedestrians and cyclists and connect with the Emerald Trail. Money is in the budget for construction but it is still in the design phase, which Boyer expects to be complete by the end of the year.

The road diet project will launch another phase of development with the focus on Park Street, Boyer said.

Trevato Development Group plans to renovate commercial buildings at 301 and 339 Park St. into a food hall, similar to Krog Street Market in Atlanta. It would have multiple tenants with artisanal foods, retail and dining.

“They’re ready to go with some of it, but they don’t want to get ahead of the road diet,” Boyer said.

Redevelopment in that area is already underway with the Lofts at Brooklyn, by the Vestcor Companies. The five-story, 133 units will be affordable and workforce housing, along Spruce Street between Jackson and Stonewall streets.

Boyer said the Lofts are important because they are the first project on the other side of Park Street, and they are mixed income, which gives people who live in Brooklyn the option of staying.

Brooklyn has been a black neighborhood since after the Civil War when Miles Price bought the Dell’s Bluff plantation. He sold the southern half to Florida Union editor Edward M. Cheney and Boston developer John Murray Forbes, who developed the suburb of Riverside.

Price kept the northern half and renamed it Brooklyn. One of Brooklyn’s streets is named for him.

The shotgun houses and other modest dwellings were built on streets named for for Confederate heroes — Jefferson Davis, Robert E. Lee, Stonewall Jacksonville — and occupied by former slaves and veterans of the Union Army known as Buffalo Soldiers, a name given to them by Native Americans.

A decrepit, boarded-up house at 328 Chelsea St., known as the Buffalo Soldier’s Home, is the last remnant of that time and considered one of the most endangered historic buildings in Jacksonville.

Brooklyn was annexed by the City of Jacksonville in 1887.

The residential character began changing with the arrival of the Florida East Coast Railroad line in the late 19th century that cut through its eastern border.

The opening in 1921 of the Acosta Bridge, first to span the St. Johns River, brought a growth spurt to the area and new interest in developing it commercially. In the 1950s, Interstate 95, cut across its western border.

In the 1960s, desegregation gave blacks the opportunity to live anywhere, and they began to move out and commercial and industrial moved in.

Office buildings sprang up along the riverfront corridor. But without a strong neighborhood advocate like Riverside Avondale Preservation, the rest of Brooklyn fell into decline.

In the 21st century, a new emphasis on downtown redevelopment pulled Brooklyn into the boundaries of Downtown Jacksonville. It now had an advocate – the DIA.

Retail and restaurants quickly filled in the Fresh Market shopping center and 220 Riverside’s retail space. Some of the early comers, like Corner Bakery Café at Brooklyn Station closed, and eventually was replaced by First Watch, a restaurant serving breakfast and lunch.

The retail space at 220 Riverside had a tougher ride. Sbraga & Co., Hobnob, and Brixx Wood Fired Pizza are restaurants that have come and gone. The vacant retail space was sold a year ago to Mid-America Apartments LP of Memphis, Tenn. Anejo Cocina Mexicana, a Ponte Vedra Beach restaurant that eyed expansion into Jacksonville, is the new tenant at 220.

The Unity Plaza amphitheater, which had been expected to be a community venue for concerts and venues, has fallen silent. But Boyer thinks it will get a second wind when the new apartments around it fill up and the transportation pieces fall into place.

“You really need a targeted food and beverage district. It’s really hard to get people to come from six blocks or six miles on a regular basis,” Boyer said, “But if there’s a cluster of things with thousands of people working and living around it, you create an atmosphere that is attractive.”

New bill could help ‘Save our Stages’ in Central Florida

Black lives don’t matter when it comes to sports