A bid by the Cherokee Nation and Jerry Jones’ Legends Hospitality for a casino license in Arkansas has taken yet another twist in what has been a lengthy, litigious and drama-filled process.

A decision last week by the Arkansas racing commission appeared to award the state’s last remaining casino license to a Mississippi partnership competing with the Cherokee Nation and Legends plan. But that decision is now being referred to the state attorney general amid claims of biased scoring by one of the commissioners, according to the Arkansas Democrat-Gazette.

In the affidavit published by Little Rock Fox affiliate KLRT-TV, McDaniel admitted the Cherokee Nation does not know “the nature or extent of the relationship” between Gulfside and Rice, who owns a trucking business.

The allegations of bias came after Rice gave a perfect 100 score to Gulfside’s bid and a 29 to the Cherokee bid, according to the Democrat-Gazette. Each Arkansas racing commissioner scored the projects, with the total determining the license outcome. Rice’s 71 point scoring difference gave Gulfside a 637-572 victory margin.

Rice disputed the allegations, but sat out a vote in which his fellow commissioners overwhelmingly determined he was biased in favor of Gulfside, the Democrat-Gazette reported.

In a statement, the Cherokee Nation’s lawyer said the only route forward is to eliminate Rice’s scores – a move that would give its plan a higher point total.

“We are grateful the commission reached the appropriate conclusion, and we’ll diligently work with their counsel to determine next steps,” McDaniel said in a statement.

“However, their options are severely limited by the rules that are now in place. According to the rules, the license must be issued 30 days from June 18th. It would be impossible to pass any new rule even on an emergency basis within the next 25 days. It appears that their only real option is to remove the disqualified score from the panel’s award of points and let the appeals proceed.”

Legends, started by the Dallas Cowboys owner in 2008 along with then-New York Yankees owner George Steinbrenner, did not return The Dallas Morning News’ request for comment. 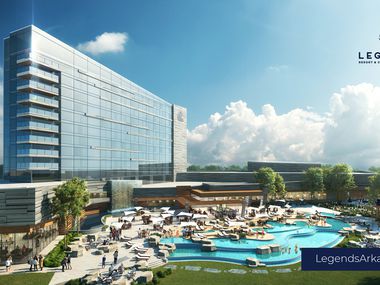 The months-long licensing process in Arkansas has been highly competitive as the Pope County license is the last of four to be awarded. Voters approved a constitutional amendment in 2018 to allow four casinos in the state.

If chosen, Oklahoma-based Cherokee Nation Businesses would operate the proposed $225 million casino with 1,200 slot machines, a 200-room luxury hotel, a music venue and outdoor water park. The tribe describes itself as the nation’s largest with 360,000 citizens and more than $1 billion in revenue in 2017.

CEO Chuck Garrett said the tribe is working with an “elite team” of partners, including Legends, Dallas-based HKS Architects and Arkansas-based CDI Contractors.

“As the superior operator, we look forward to ultimately receiving the casino license and establishing this economic anchor in the River Valley,” Garrett said in a statement to The News. 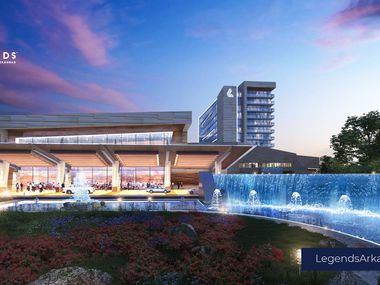