American Airlines said it will cut more than a third of its international flights this summer, freeze hiring and retire planes early as it braces for economic pain from the growing global shutdown over the COVID-19 coronavirus.

Fort Worth-based American announced the cuts only a few days after it announced reductions in its flying network on Monday, showing just how serious the situation has become in the last few days.

“As you know, coronavirus (COVID-19) has hurt demand for travel around much of the world,” American CEO Doug Parker and chief operating officer Robert Isom wrote in a note to employees. “While we have moved quickly to reduce our schedule to match demand, it’s become clear that more is needed.”

Many of the flight reductions come in the region of Europe most affected by the White House’s travel restrictions on foreign nationals announced Wednesday evening, but the airline also suspended some routes to London and South America. 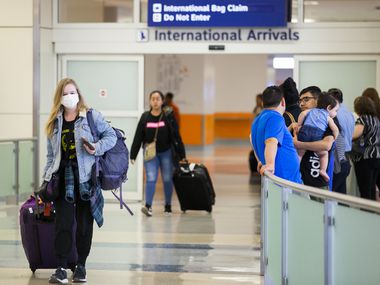 That includes flights from DFW to Rome, Frankfurt, Madrid and Paris through at least May 7.

Over the last week, the spreading coronavirus threat has resulted in professional sports leagues suspending seasons, churches canceling services and has governments discouraging large gatherings. No industry has felt the pain more sharply than travel and airlines, where stock prices are plummeting and leaders are expecting as much as $116 billion in global losses from COVID-19.

For the next 60 days, American said, it will delay “systemwide” hiring and promotions, including internal and external moves. The company had already announced that it was canceling new classes for flight attendants. American has more than 130,000 employees, including those its regional affiliate, Envoy. Among those, about 33,000 are in the North Texas region.

American is also deferring merit pay raises for top-level leadership and giving employees, including union workers, the option to take an unpaid leave of absence. That would allow the company to lower its head count as workers take furloughs and then ramp operations back up quickly when the situation stabilizes.

Raises for most employees at the company are determined by union contracts. But flight attendants, pilots and mechanics are in various stages of contract negotiations right now and won’t get raises until the new deals are signed. Mechanics, baggage handlers and fleet service workers are set to vote on a contract later this month.

CEO Doug Parker doesn’t take a base salary and is paid mostly in stock awards and bonuses.

The declining number of travelers is also decreasing the demand for aircraft and American said it will move up retirement dates for its Boeing 767 fleet to May of this year and will retire its Boeing 757 planes by the end of next summer.

Before the COVID-19 crisis, American leaders were pushing for more planes and said the airline was hampered by the year-old grounding of the Boeing 737 Max.

Coronavirus impact on airlines is worse than predicted, may worsen